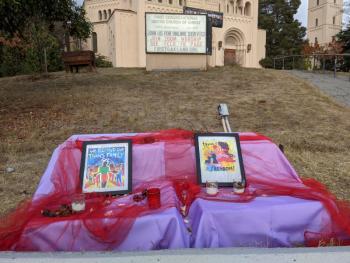 It's been a while. I certainly thought I'd be blogging more during my sabbatical! But I'm alright with having not, since I've been writing plenty otherwise. Thanks to a good friend who has also been doubling down on their commitment to their writing, not only have I been doing a thrice-weekly writing workshop of sorts with them, but I'm also participating in NaNoWriMo for the first time! 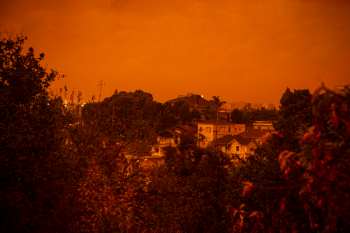 I've spent most of the morning just wandering around the house, looking agape out the windows at the dark orange skies, occasionally stepping outside to try to take a photo and marveling at how cold it is because of how thoroughly that powerful California sun is blocked by smoke.

As I wrote last week, I've been on a social media fast since August 8, logging out of Facebook and Twitter on my phone as we left for vacation in Point Reyes and leaving my computer behind entirely. (I still feel both very lucky to have gone on said vacation when we did and a bit obscene talking about having vacationed there while the park is still closed to visitors due to the Woodward fire there.)

Today is day 27 of my 156 day sabbatical, spanning August through December. I'm trying not to obsess too hard over how much of my sabbatical has passed and how much is left, but in writing this I couldn't resist doing the math and learning that I'm 17% through my sabbatical at this point.

Welp, the old version of jackalop.es got hacked a while back, as WordPress sites are wont to do in my experience... So luckily while helping out at the Intro to Backdrop training at BADCamp last week I got the opportunity to set up a new website using Backdrop, my favorite CMS. Exciting to have a Backdrop site all of my own to mess around with now! (Funny, I never really considered setting a Drupal site up for myself...)

Things are a bit of a mess right now; lots of broken images and embedded videos and WordPress-specific things that no longer work. I'll gradually be getting this place in shape. And who knows, maybe I'll start posting again, even!

The centre cannot hold: on diversity and inclusion in tech

Does the language of diversity and inclusion in tech serve us?

In her autobiography, Assata Shakur warns of the slippery nature of "liberal," both the word and the political concept.

This past week I saw a pair of trumpeter swans a'swimming on Swan Lake in Wyoming.

Since identifying the lake as a destination on our hike, Tchaikovsky's Swan's Theme has been firmly lodged in my brain. When we reached Swan Lake itself I dramatically sang what I knew of it from the shore, one of my companions helpfully picking up the tune, my arms spread wide, for once not really caring whether I disturbed the people or creatures around me. (And hey, it's important to scare off the bears!) I even made a fair attempt at a lesser-known section that leads up to the repetition of the leitmotif.

A few moments later an older white couple walked over to us, one of them smiling and then enthusiastically thanking us for our performance and appreciating that we managed to stay on tune. She laughingly claimed that the pair of swans across the lake, which I actually hadn't seen before I began singing, beat their wings against the water to applaud us as we sang. (I later joked that they were probably beating their wings in frustration, thinking "goddamn it can people stop singing that fucking song at us already?!?")

I'm fairly certain that out of our group of four in which I was the only non-white person, this woman did not expect me to be the one who'd first encountered Swan Lake when learning an adaptation of the theme during piano lessons at age 6 or so; the one who is probably most personally sad about Tchaikovsky's life trajectory and deeply moved by his music in that light; or the one who would, upon returning to reliable and secure wifi, download a good recording of "Swan Lake," listen to it incessantly, marvel at the Swan dancing en pointe in YouTube videos, and tell their partner happily of their newfound appreciation of ballet after having stuck primarily to non-ballet classical music and opera for the past three decades and that they'll go to the ballet with her more enthusiastically than expected after all.

This morning I found myself sitting in my favorite neighborhood spot, Akat Cafe Kalli, where the politics are as palpable and potent as the coffee. I sat here, eating my breakfast sandwich, drinking my café de olla, reading my book , nodding my head along to the music, which I was growing increasingly aware of and was increasingly digging, but also increasingly scared to trust it. As I listened to the explicitly political lyrics on police violence, racism, sexism and homophobia that seemed to speak directly to me as a queer, leftist, womanish person of color, my suspicion grew that I might feel significantly less in tune with other, yet unnamed politics of the artists whose album was playing. The feeling increased as the words, now in Spanish as well as English, continued to resonate as much as the music to which they were set.

Reflections on a morning well spent

I need to remind myself that, in getting out of the house, I often expose myself to great beauty and blessings.

Yesterday was a day of reckoning with myself and all of my loose ends, among them an overdue shopping trip. I set some lofty intentions for today:

It happens sometimes. I do web work and other kinds of tech support for community organizations, some of whom I work with outside of paid work. Working at this intersection of technology, my activism and my communities means I get shaken up at unexpected times.

Today I was working on a plan for a new website for the Audre Lorde Project, an organization I've worked with both professionally and politically for more than a decade now. I was checking out their site analytics to get a sense of what their site traffic might indicate about who's coming to the site, and for what.

I pulled up a report of their site traffic over the past year and saw two huge spikes. I started looking into the first one.